All arts, professions, and occupations have their technical terminology: the specific and specialized vocabulary that makes it possible for their practitioners to communicate clearly and unambiguously with each other. There are many dictionaries on the general subject of book history and printing—a vast topic that branches into many aspects of paper, printing, illustration, binding, auctioneering, etc. This Glossary provides a basic terminology in English for describing, cataloguing, or otherwise speaking or writing about comedias sueltas.

When deciding which words to include, our guiding principle was to select the terms that users of our Database—or any other part of the website—are likely to encounter in bibliographic records, essays, or comedias sueltas literature in general. More importantly, we wanted to arm literary scholars with the most useful vocabulary when studying sueltas in libraries and writing about them. Therefore, we looked closely at the bibliographic records already in the Database, especially the General and Local notes, that read like library jargon. We included in the Glossary terms and expressions that we felt were unfamiliar to researchers when handling sueltas for the first time or attempting to interpret their bibliographic descriptions. Sources for most of the vocabulary that needed explanation and illustration were:

❖ Library records. A database search produces images of the play on the left hand of the screen. On the right-hand side is a bibliographic record, which is subdivided by fields. Some of these (e.g., Author) are perfectly obvious; others may be less so (e.g., Signature, Citation Reference, or Printer’s Series Number).

❖ The General Notes field, where librarians enter details about author attribution, printing history, etc. and that may include concepts, people, and institutions unfamiliar to the nonspecialist user.

❖ The components of the printed sueltas themselves and/or the information that collectors or librarians have added to them. For example, pencil notations, such as date, name, pricing, etc., which run parallel to the gutter of the suelta. The practice of adding this information is known as “sourcing.”

Whenever possible, we have included an image to illustrate a definition, starting with some labeled pages preceding the alphabetical arrangement of the Glossary. Much like an anatomical chart in a doctor’s office, they have tags pointing to some of the essential and defining parts of a suelta.

The first line of each entry displays both the English word or phrase and its Spanish equivalent, followed by a definition and example(s) of how it is used specifically in relation to sueltas. Whenever possible, we have included an illustration; we want the definitions to be as visually self-explanatory as possible. As suggested above, the Internet offers videos of some of the most difficult-to-understand technological processes.

Let us know if there are any words you would like to see added: contact@comediassueltasusa.org

Berger Sidney E. The Dictionary of the Book : A Glossary for Book Collectors Booksellers Librarians and Others. Rowman & Littlefield, 2016.

Suarez, Michael F., and H. R. Woudhuysen. The Oxford Companion to the Book. Oxford: Oxford UP, 2010. 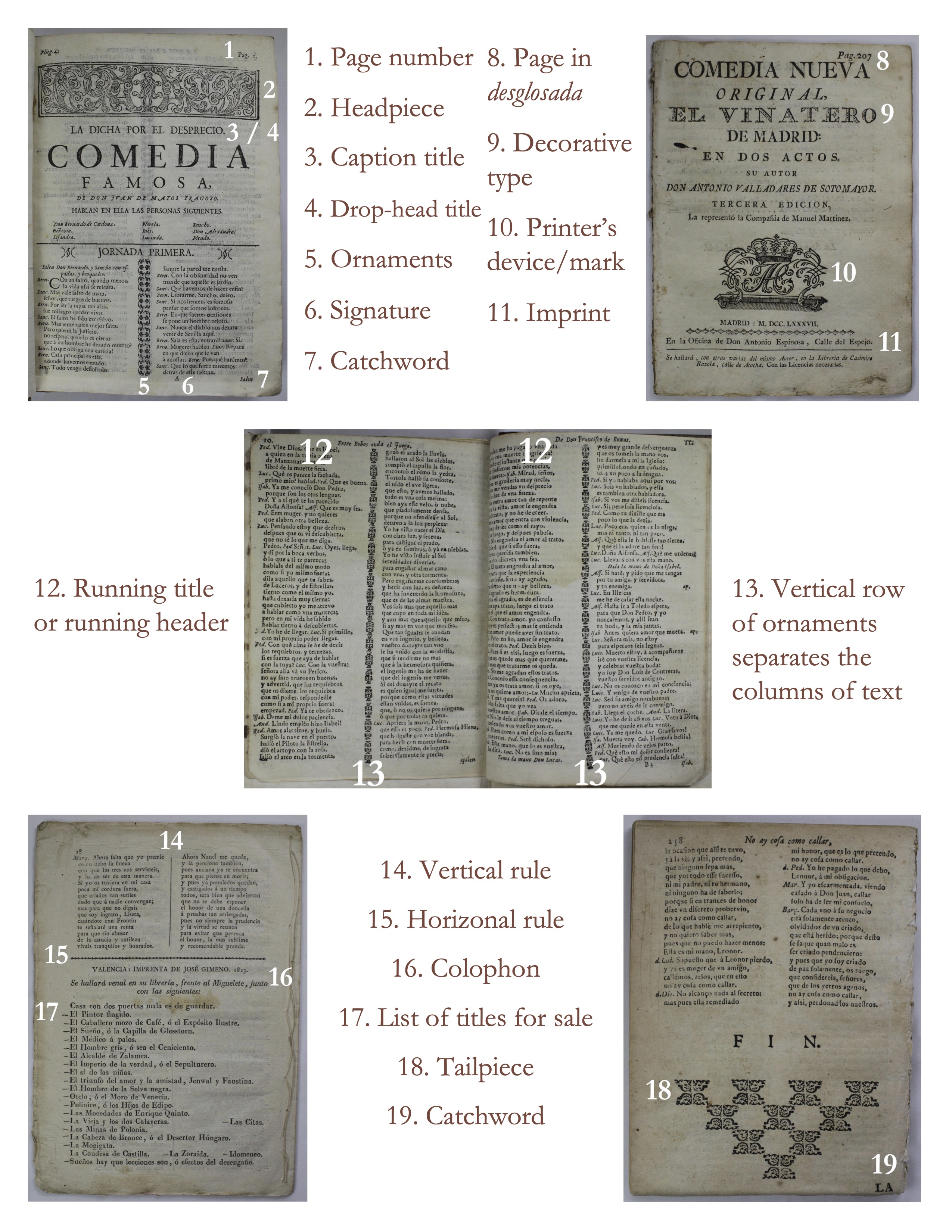