As explained in the papermaking entry and demonstrated by the videos, paper was formed one sheet at a time. If not folded at all and printed on one side, portrait style, the result was a broadside. For large books (folios), the sheet was folded once, which produces two conjugate leaves. The dictionary defines the adjective conjugate as “coupled, connected, or related”: the two leaves are connected in the fold. In keeping within our universe of the printing of sueltas, each sheet was folded: twice to produce comedias in quartos and three times for printing entremeses in octavos. (This material is also covered in the entry under format.)

A book smaller than a folio cannot be read until the conjugate leaves are opened, (i.e., separated from each other). Unopened books may be valued as bibliographic objects but do not function as books.

When folded, each printed sheet is called a gathering or quire; the sum of the gatherings makes up the text block or book. The binder knows the sequence to sort the gatherings because of the signature marks. (see signature and collation). The numbering of pages was done by the printer for the convenience of the reader. Foliation is the numbering of a single side of a leaf, as opposed to when both sides of the leaf are numbered, which are the "numbered pages" that modern readers are most used to seeing.

Foliation was most common before 1640, but if we examine the “fake” partes of Calderón (see below under nonce volume), which are made up of 108 sueltas, we find 64 with no numbering at all, 38 with foliation, and only six with pagination. Not all the fake volumes used the same suelta editions, and there may be some variation here. Only one suelta has a date, 1699, but the vast majority are from 1690–1710 and are from Madrid. It may be that the practices varied in other major cities. [DWC]—can we put elsewhere?? under FAKE volumes or work it in with factitious volume

Pagination is the sequence of arabic (1, 2, 3, 4) or roman (I, II, III, IV) numerals that are assigned to the pages of a printed work. The numbers are printed consecutively, traditionally in the upper-right corner of a recto page and the upper-left corner of a verso page. In plays printed after 1800, the numbers sometimes appear in parentheses in the top or bottom middle of the page.

Books can also contain unnumbered pages, which are still part of the sequence. These page “numbers” are often supplied by cataloguers in square brackets to give a better sense of the extent of the work. For example, a suelta could have 35 numbered pages and a blank unnumbered page at the end. In rare book cataloguing, this extent would be written as “35, [1] pages” to make it clear that a final blank page exists at the end of the sequence.

Furthermore, page numbers in catalogue entries can be expressed as p. or pp. or pages, depending on the cataloguing guidelines and the conventions used when the item was catalogued.

Pagination differs from foliation in that pages are numbered on both sides, whereas folios are only numbered on one side, usually the recto. One must remember that the sequence of numbers is the most important way of distinguishing between pagination and foliation; for example, a title page might have “pág. 1,” followed by a blank verso page, followed by a page numbered “3.” This is pagination, not foliation, as the blank verso is an implied “page 2.” 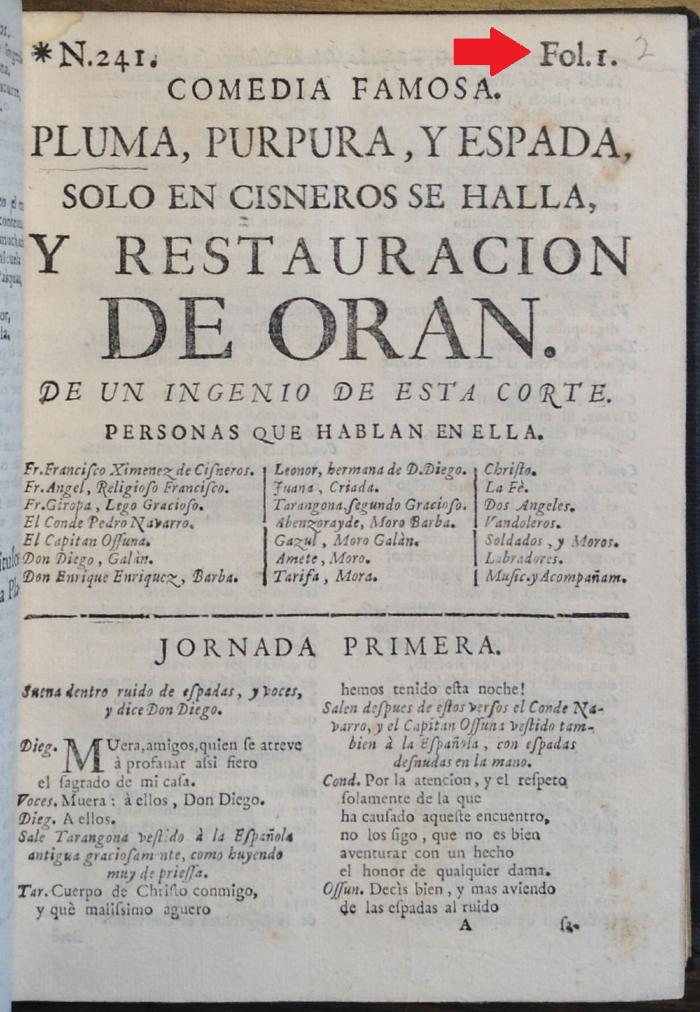