Critics often regard chapbook editions of Golden Age plays, sueltas, as spurious, owing to the changes introduced by their printers, who would often adjust the text for convenience to fit the forme, further adulterating what was already a text altered by stage directors.[i] Considering the stated goal of critical editions, to reproduce an author’s final intention,[ii] the disdainful attitude of critics is understandable. But for dramatic works the objective reproducing the play that was intended by its author is relativized by the genre’s ontological essence as well as by its practical realities. Whenever possible, priority is given to the author’s manuscript, but even then it can be impossible to determine ultimate intention. For example, the autographs by Luis Vélez de Guevara held in Spain’s National Library[iii] are full of the dramatist’s cross-outs, cues and cuts—perhaps optional—that reflect changes of mind or last-minute decisions for staging, and even, as in the case of El Águila del Agua, an entirely different dramatic idea. What is more, the plays seen by audiences never reflected the author’s exact intention; there were always adjustments and adaptations, even by the playwright himself.[iv]

Lacking an autograph manuscript, primacy is given to editions in whose preparation the author was involved, such as the Partes of Lope de Vega, Ruiz de Alarcón, or Pérez de Montalbán. The dramatist’s participation in the publication of his works in collections did not necessarily guarantee that texts were faithful to the original, but his authority, while not infallible, normally produced results that were satisfactory from a literary standpoint. Here is where the relevance of sueltas and non-authorial collections begins to be appreciated, because they frequently were based on performance manuscripts that had been used by theatrical companies,[v] in other words, texts that performed the author’s intentions onstage. In the following are illustrations of how sueltas can be useful in the process of creating a critical edition.

First, a suelta can provide readings that correct the errors in earlier witnesses. Such is the case, for example, of Vélez de Guevara’s El cerco del Peñón de Vélez:

The first edition, P, reproduced many of the poet’s usages and linguistic features, but the witness suffered from mistaken readings that were corrected in the suelta, S:

A suelta sometimes affords a helpful glimpse of how a work was performed. Compare, for example, the stage directions of two witnesses of La mayor desgracia de Carlos Quinto: a performance copy that belonged to Antonio Prado’s company, which premiered the work in 1623, MS1, and a suelta, S, probably based on some other performance copy and printed shortly after the play was taken out of the repertoire, at the moment of the printing’s highest marketability:

Even a badly damaged suelta with poor typesetting can lead the reader to an earlier stage of the play’s textual transmission. An example of this is the suelta of another play by Vélez de Guevara, Correr por amor fortuna:[vi]

The low regard that critics hold for pamphlet editions is understandable with S. It is the only known copy of Correr por amor fortuna, and it is frustratingly defective,[vii] but when the editorial process applies strophic and metrical formulas, one sees that the work contained, at a minimum, thirty-one lines more than were transcribed in the printed text, either because of the typesetter’s carelessness, as in the case of single lines (vv. 537, 581, 746, 1038, 1070, 1181, 1613, 1636), or because of longer cuts by the stage director or by the printer (vv. 328-37, 1436-37, 1441-46).

Up to here we have considered single sueltas as textual witnesses. The existence of multiple editions can also be a factor in the creation of critical editions.

In a way that is impossible with an autograph manuscript or an authorized Parte, sueltas can illustrate the chronology and geography of a play’s textual transmission, and they can even suggest the sociology that operated behind its reception. Such is the case of El cerco de Roma por el rey Desiderio, composed by Luis Vélez de Guevara in 1604 or 1605.

There is no known authorial witness; the work has come down to us only through sueltas and a modern edition based on a late witness. The textual tradition of this once-popular work, now nearly forgotten, even includes pliegos de cordel, which themselves are documental remnants of customs that, like the play, are today forgotten—after-dinner dramatic readings and songs performed by blind balladeers.[viii] Despite El cerco de Roma’s manifest editorial popularity, only two stage performances have been documented, in Salamanca, in October, 1606,[ix] and in Havana, in August, 1791,[x] but those dates, if the first one was in fact the play under consideration, are evidence of a trajectory that has left a notable bibliographical trail of twenty-one sueltas.

Five editions were published without indication of place, printer or date:

Copies of this last edition were incorporated, with «Num. 71.» imprinted at the heading of fol. 1, in Part VI of the Jardín ameno de varias y hermosas ﬂores series, published by Gabriel de León’s heirs:[xi]

The fifth witness published without printers’ data, S5, was probably produced in Seville by José Antonio Hermosilla, because its design and typographical features bear close similarities with the sueltas published by that printer, such as the title composed in capital letters much smaller than «COMEDIA FAMOSA», the use of a leafy ornamental rule between the text’s double columns, and the use of similar typefaces:

Besides these, there are five pliegos de cordel whose text corresponds to ll. 1-164 of the play:[xii]

These pamphlets reproduce the initial confrontation between King Desiderio and Leoncio, in which the invader and the beseiged cardinal—and future Pope—justify their presence, their values and their raison d’etre.[xiii] Their respective speeches would take on new resonances in other contexts, such as the War of Succession (e. g., the Sevillian pamphlet), or the demographic reforms promoted by Campoamor and imposed by Olavide[xiv] (e. g., the pamphlets printed in Málaga y Lucena), or the War of Independence (e. g., the two Cordovan pamphlets). 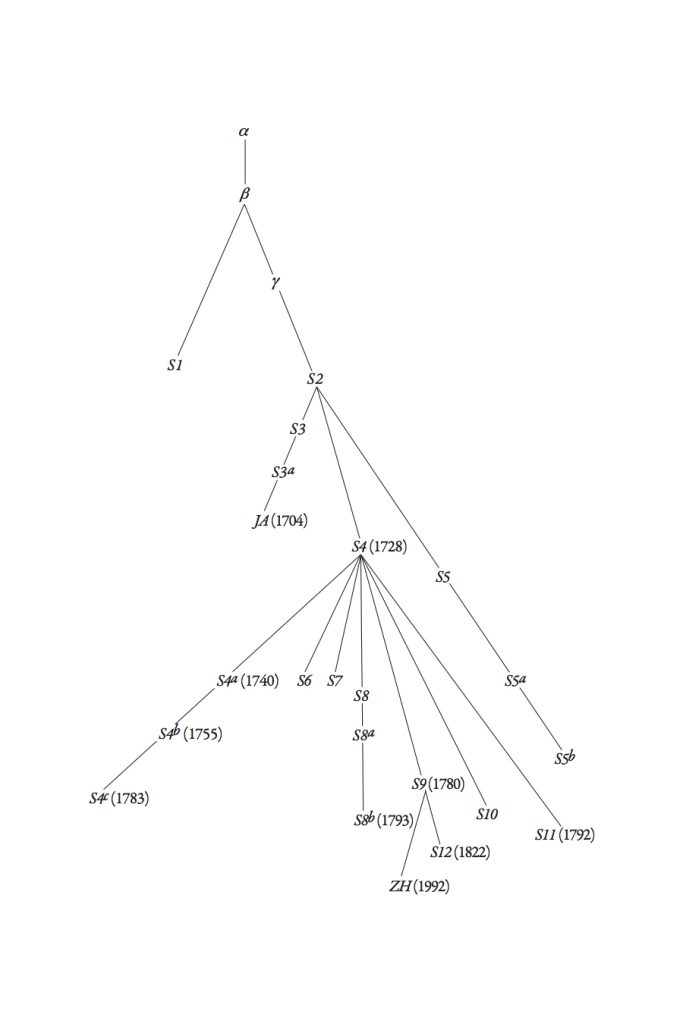 The duality of the textual tradition could not be clearer. The first branch, embodied in S1, probably derived from a performance manuscript copy, b, related to Vélez’s lost autograph, a. The other branch, headed by S2, descends from an annotated performance manuscript, g, that an autor de comedias sold to a printer/bookseller, doubtless in Madrid.[xv] S1 contains 113 lines that do not appear in S2-S10. As a natural consequence of those cuts some characters, Desiderius most of all, lose some of their emotional nuance. On the other hand, the majority branch preserves scenographic details in stage directions that doubtlessly came from Vélez’s original work. A cluster of witnesses in this second branch, S2, S3 y S5, from Madrid and Seville, respectively, stands out for its close coincidence of variants, and for its errors. And in the same way, there is notable, but not absolute, consistency between S4, S6, S7, S8 y S9, that is, between the witnesses produced in Madrid, Valladolid, Burgos, Salamanca and Valencia.

In the stemma of El cerco de Roma one can see that the witness closest to Vélez’s original text, S1, left no trail. On the other hand, S2 was the source of the subsequent proliferation of imprints by the print shops of Gabriel de León (S3-JA) and Antonio de Sanz (S4-S4c). The stemma also illustrates the geographic and chronological distribution of the play’s textual tradition: though not specified, S1, S2 and S3 were surely produced in Madrid, as were S4 and S10; S5 is Sevillian, S6, from Valladolid, S7, from Burgos, S8, from Salamanca, S9 and S12, from Valencia, and S11, from Barcelona.

In contrast to this diversity of editorial activity, five sueltas were published around the years 1740 (S4a, S5a, S6, S7, S8) and three in the years 1792-93 (S8b, S10, S11). The coincidence of these editions could be explained simply by the imitationism that has always characterized the book publishing industry, but El cerco de Roma’s simultaneous printings in Madrid, Sevilla, Salamanca, Valladolid and Burgos or, again, in Madrid, Salamanca and Barcelona, raise the possibility of a circumstantial backdrop that was shared in common, that is to say, a sociology—a collective consciousness and ethical system—, whose values and preoccupations within a specific historical context[xvi] were somehow reflected in the play. The same could be said for the relaciones that circulated in Andalusia. In this sense, that is, in terms of its circulation and instrumentality, El cerco de Roma has lasted even till the present as a case that is sui generis, because one of the many sueltas published in the eighteenth century crossed the Atlantic and reached Huamantanga, in the Peruvian highlands, where the genealogical play was transformed into a ﬁesta of Christians and Moors that continues to be celebrated every two years right up to the present.[xvii]

In summary, though sueltas are frequently regarded to be of little value for critical editions and studies, it is a mistake to write them off, because the dramatic works that they reissue are, essentially, both literary and performative. Critical editions that aspire to reproduce the playwright’s final intention give primacy to the work as literature, thereby closing the text—a text that was probably never performed exactly as written. As textual witnesses sueltas can illuminate both aspects of this dual dynamic. While it is true that chapbook editions often present degraded versions of a work, sometimes they can be used to rectify errors in earlier witnesses or to clarify obscure meanings; sometimes they throw light on how a play was actually staged. Further, multiple sueltas can bear witness to a work’s circulation and, hence, its reception and meaning within successive historical contexts.

Spencer, Forrest Eugene, and Schevill, Rudolph. The Dramatic Works of Luis Vélez de Guevara: Their Plots, Sources, and Bibliography (U of California, 1937).

[i] Countless examples of this phenomenon have been documented with varying degrees of specificity. A particularly illustrative case is that of the autograph and imprint of El Conde don Pero Vélez y don Sancho el Deseado, by Vélez de Guevara. See the Manson-Peale edition, pp. 50-65.

[ii] Traditionally this has been the stated purpose of critical editions, but for more than a generation textual criticism has recognized other ecdotic purposes and methods. See Greetham, pp. 383-417, who reviews various kinds of “critical editions”; the “Prefacio” by Manson and Peale in El espejo del mundo, pp. 30-46, which discusses the issues of documentary editions. Also, Pierazzo, who points up new directions for the future.

[viii] Besides the edition of Ziomek and Hughes, El cerco de Roma por el rey Desiderio figures in Medel, pp.165, 364, in La Barrera, pp. 467b, 535a, Cotarelo, 3: 277, Spencer and Schevill, pp. 164-66, Urzáiz Tortajada, 2: 700, and Germán Vega, “Vélez de Guevara, Luis,” p. 587. The title does not appear in any of the standard reference works, in CATCOM, in the Fuentes para la Historia del Teatro en España, nor in Profeti. Neither do the alternative titles cited by Fajardo, Lo mejor es lo mejor and Antes que amor es la patria.

[ix] On October 26,1606 a play entitled Roma sitiada was performed in Salamanca. See Domínguez Búrdalo, p. 210. It is impossible to say for certain that the work was El cerco de Roma, but the circumstances are sufficient to propose the hypothesis. See Peale, “Estudio bibliométrico,” in El cerco de Roma por el rey Desiderio, pp. 49-52.

[xii] See the comprehensive studies by Marco, García de Enterría, Caro Baroja, Mendoza Díaz-Maroto; and more specifically, Gillet, Wilson, Moll, Lorenzo Vélez; and most of all, the commentaries of López and Cortés Hernández. Joseph Blanco White described the use and colorful experience of these pamphlets: “At Christmas in Andalusia, party amusements consisted of singing, dancing, and not unfrequently, speeches, taken from old Spanish plays, and known by the name of Relaciones. Recitation was considered till lately as an accomplishment both in males and females; and persons who were known to be skilled in that art, stood up at the request of the company to deliver a speech with all the gesticulations of our old school of acting” (qtd. in Wilson, p. 140).